A case study : the epigraphic survey at the Ramesseum

As a member of the French Archaeological Mission to Western Thebes (MAFTO) leaded by Dr. Christian Leblanc, I have been working with Dr. Philippe Martinez, egyptologist and epigraphist, and Kevin Cain, founder and director of INSIGHT, at the implementation of a pipeline involving pointcloud data extraction derived from both Structure from Motion (SfM) and ground truth scanned data. The aim was to benefit from the geometric accuracy of the last one, and from the texture information conveyed by the first one, in order to obtain an accurate 3D textured model that may be used as a trustfully document supporting the epigraphic survey process of the hieroglyphic inscriptions of the temple of Ramses II in Western Thebes (production of orthophotographs from any kind of architectonical components, such as columns, lintels, walls, etc.).

The final idea was to define a fully automatic process to be applied to the whole monument, but for some reasons it wasn’t possible to achieve that point yet know, so we finally managed to propose a partially manual approach which is conceivable to implement. We decided to proceed to an experimentation on the Coronation Scene of the wall located in the Second Court of the Temple of Ramses II. 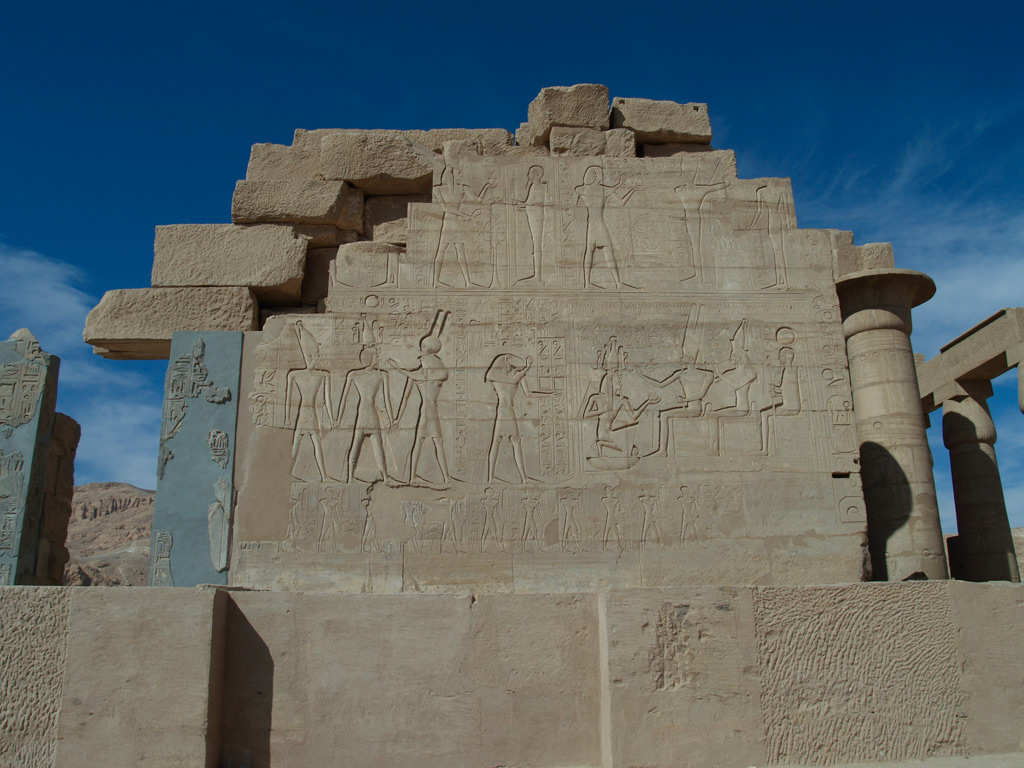 Figure 1. The Coronation Wall in the Ramesseum. © Ph. Martinez

The ground truth pointcloud was provided by INSIGHT. The product used in this tutorial is a mesh generated after a Poisson reconstruction filter has been applied the point set. The SfM 3D reconstruction is derived from a set of photographs taken by Philippe Martinez, Yann Rantier (MAFTO) and Mark Eakle (INSIGHT). 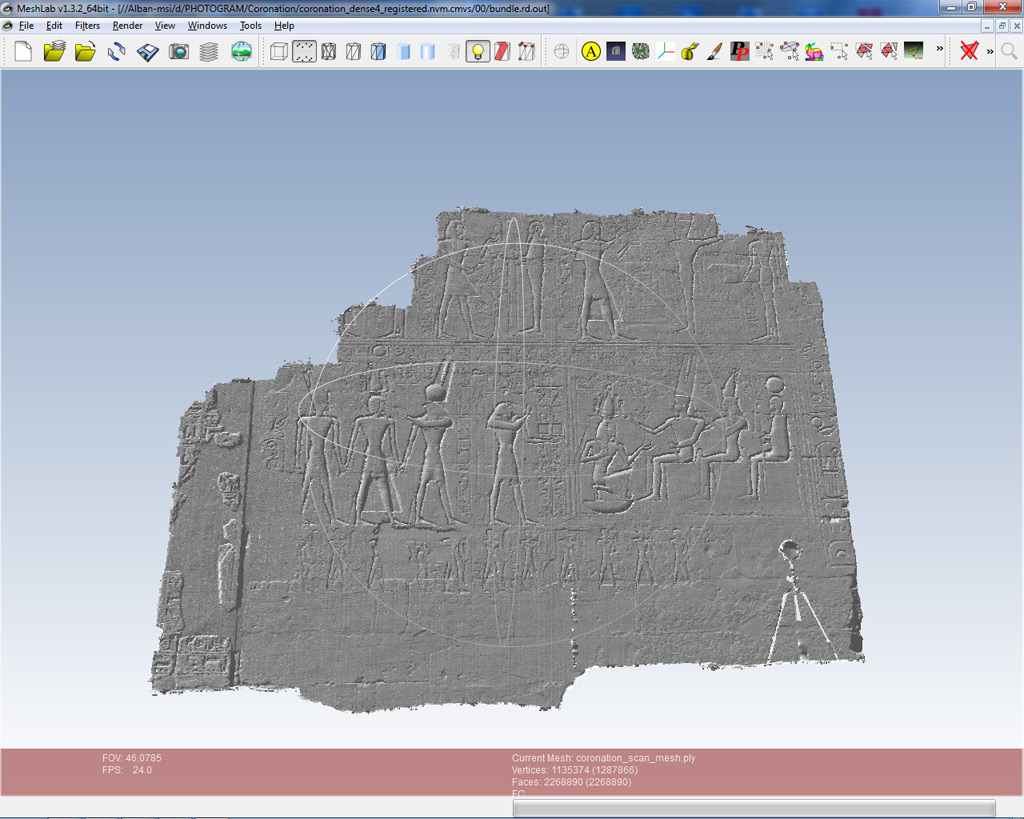 The Structure from Motion toolkit used is VisualSFM (version 0.5.20), developped by Changchang Wu of the University of Washington at Seattle. The dense reconstruction is processed with CMVS/PMVS developped by Yasutaka Furukawa, University of Washington, and Jean Ponce, École Normale Supérieure. The pointcloud and the mesh were displayed and edited with Meshlab (version 1.3.2), developed at the Visual Computing Lab of the ISTI-CNR / University of Pisa (Italy), and we are currently exchanging with Matteo Dellepiane about the implementation of an automatical approach of the processes described below.

For a whole background of this project, please have a look to « A Decade of Digital Documentation at the Ramesseum », available on the INSIGHT website.

N.B. : This experimentation is for me a side project and its outcome will definitively be profitable to my main project, the Archaeological Map of the Western Thebes, that I will present hereby soon.

1. Production of the sparse and dense pointclouds

This part is straightforward and consists in following the steps mentioned in the front page of the VisualSFM website. 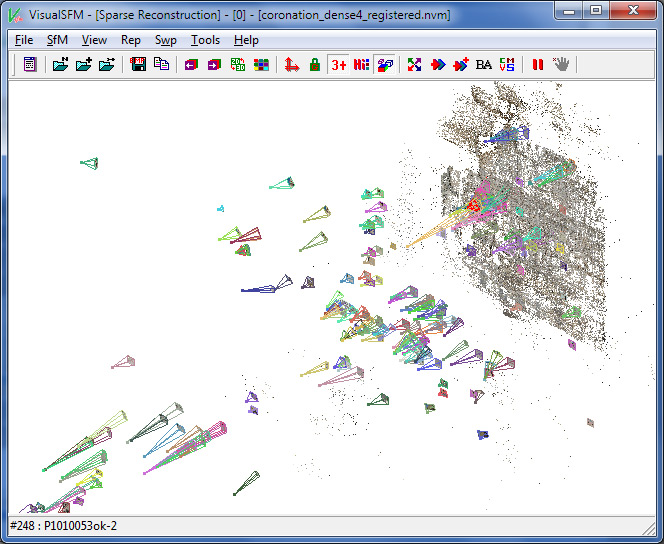 Figure 4. The sparse pointcloud reconstructed and the camera stations displayed in VisualSFM 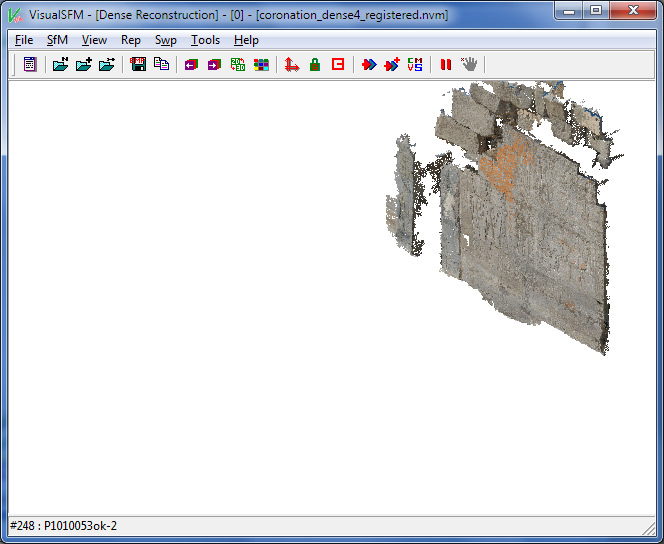 Figure 5. The dense pointcloud reconstructed and displayed in VisualSFM

2. Manual Registration of the SfM reconstructions onto the ground truth pointcloud

The registration of the SfM pointclouds will be based on some measurements taken on the ground truth pointcloud. Those measurements, the Ground Control Points (GCPs), are to be easily remarkable amongst the ground truth pointcloud and some photographs handled by VisualSFM, and should be selected throughout all the model or scene we want to process. Here I choose 6 GCPs spreaded over the wall. 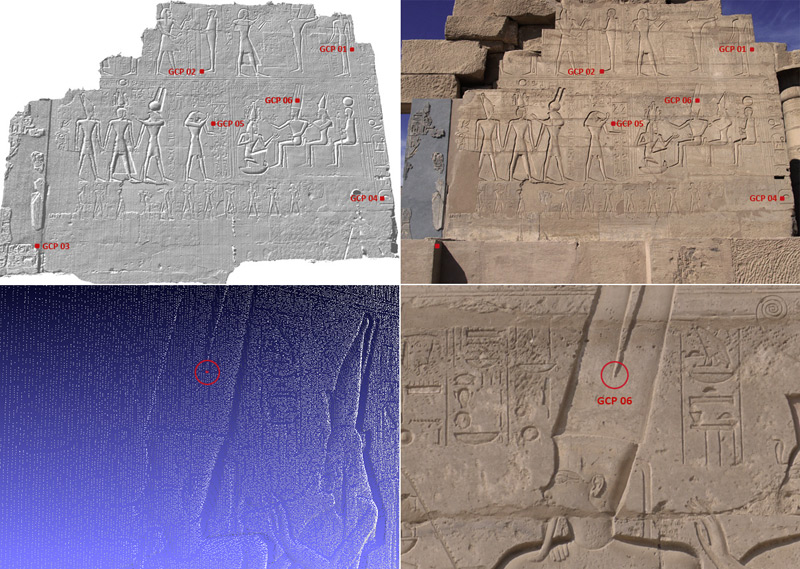 Figure 6. Selection of remarkable features in the pointcloud and in the photographs to define GCPs

N.B. : To keep a memory of the location of the GCPs, especially if they are numerous, it’s a good practice to create a modified version of a photograph where the GCP appears, and to enlight its location with a mark, in red for example as shown above, then to name the file from the GCP’s ID. Ex.: GCP06.jpg

2.2. Extraction of the GCPs’ coordinates

2.2.1. Coordinates expressed in a local system

In some case, you may obtain a more detailed *.ply file, like that :

In this case, this is quite straightforward, the line relevant to our only vertex should be read as described in the header:

x = -3379.9; y = 2874.5; z = -7623.1; Red = 195; Green = 127; Blue = 97, where the RGB values describe the color of the vertex. By the way, we can therefore decide to attribute any kind of RGB value to each of our GCPs to enhanced their visualization in Meshlab and over the native ground truth point cloud, provide the header structure reflects the set of property describing each vertex.

N.B. : Obviously, the coordinate of the GCPs would have been more accurately acquired with a Total Station.

2.2.2. Coordinates expressed in a georeferenced system 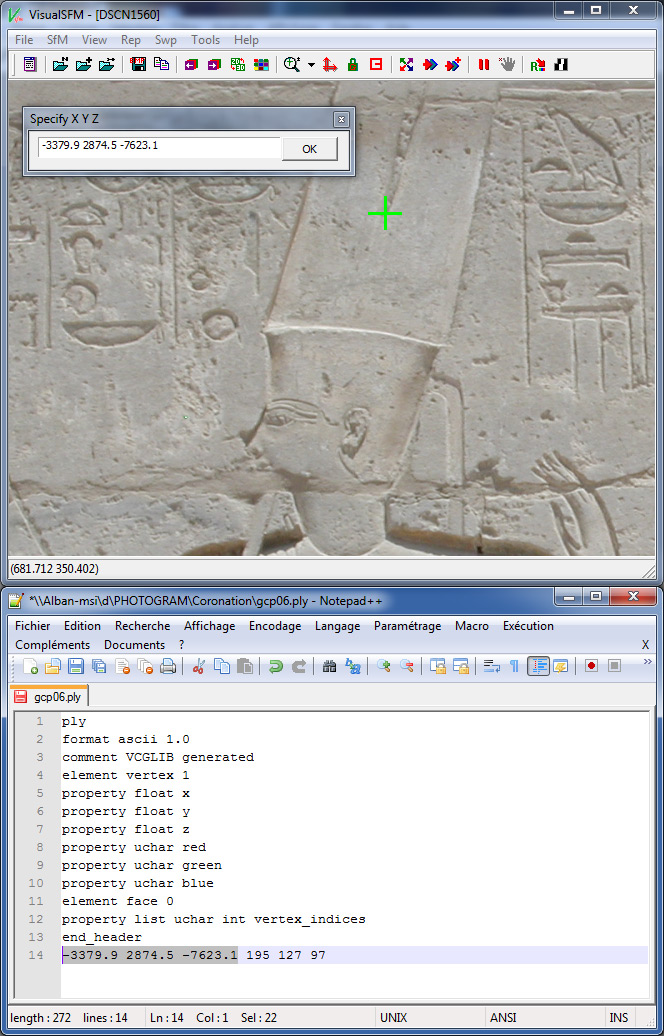 Figure 7. Registration of a GCP in VisualSFM 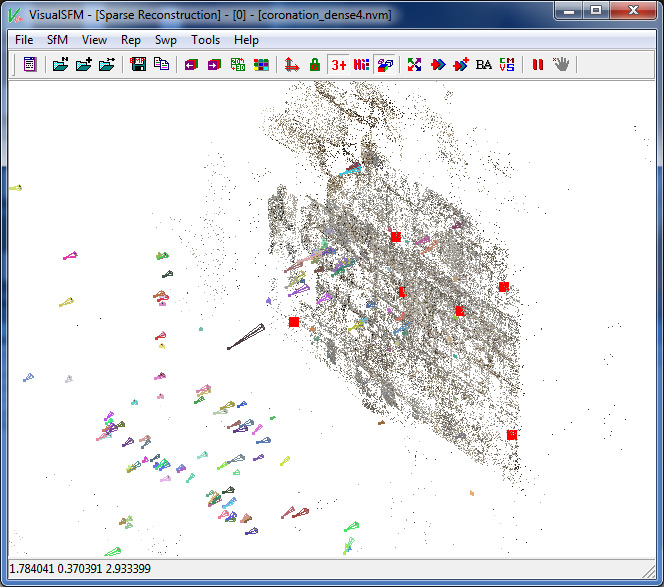 Figure 8. Registered GCPs displayed as red squares in the 3D Viewport of VisualSFM

3. Preparation, Importation and Display of the registered pointclouds

Before going on this project with Meshlab, we still need to prepare some data from VisualSFM : the bundle.rd.out file containing the sparse reconstruction and the cameras parameters, and the relevant undistorted photographs. As mentioned above, the GCP-based Transform isn’t applicable to those secondary files, so we have to process them. They are created after the user launches a dense reconstruction within VisualSFM.

Figure 9. Display of the sparse pointcloud and list of the registered rasters

Figure 10. Display of the registered rasters over the ground truth model.

4. Preparation and Extraction of the texture

In order to retrieve the texture from the photographs, we will use the Meshlab filter Texture \ Parameterization + texturing from registered rasters. For a quick overview, please watch to Mister P.’s Meshlab tutorial Raster Layers: Parameterization and Texturing from rasters. As it is said in that tutorial, the filter will be successfully applied if there is only a small number of rasters, which is not the case in our project, so we’ll have first to reduce its number through VisualSFM. The idea is to keep only the photographs we need and that convey the expected texture information, and then to export this modified version of the sparse reconstruction.

Matteo Dellepiane has kindly drawn my attention to an alternative method to enable the desired rasters without having to delete them and to generate a reduced version of the sparse reconstruction. So, if the desired registered rasters are known, it is just straightforward to disable them before the application of the Parameterization + texturing from registered rasters filter, which has to be done by unchecking the mark in front of the raster name in the layer dialog box. Many thanks to him for his comment.

4.2. Processing and correcting the mesh

The Meshlab filter Texture \ Parameterization + texturing from registered rasters will only work on a clean triangulated mesh. To ensure the mesh is fine, here are some corrections to apply :

4.4. Quality of the texture 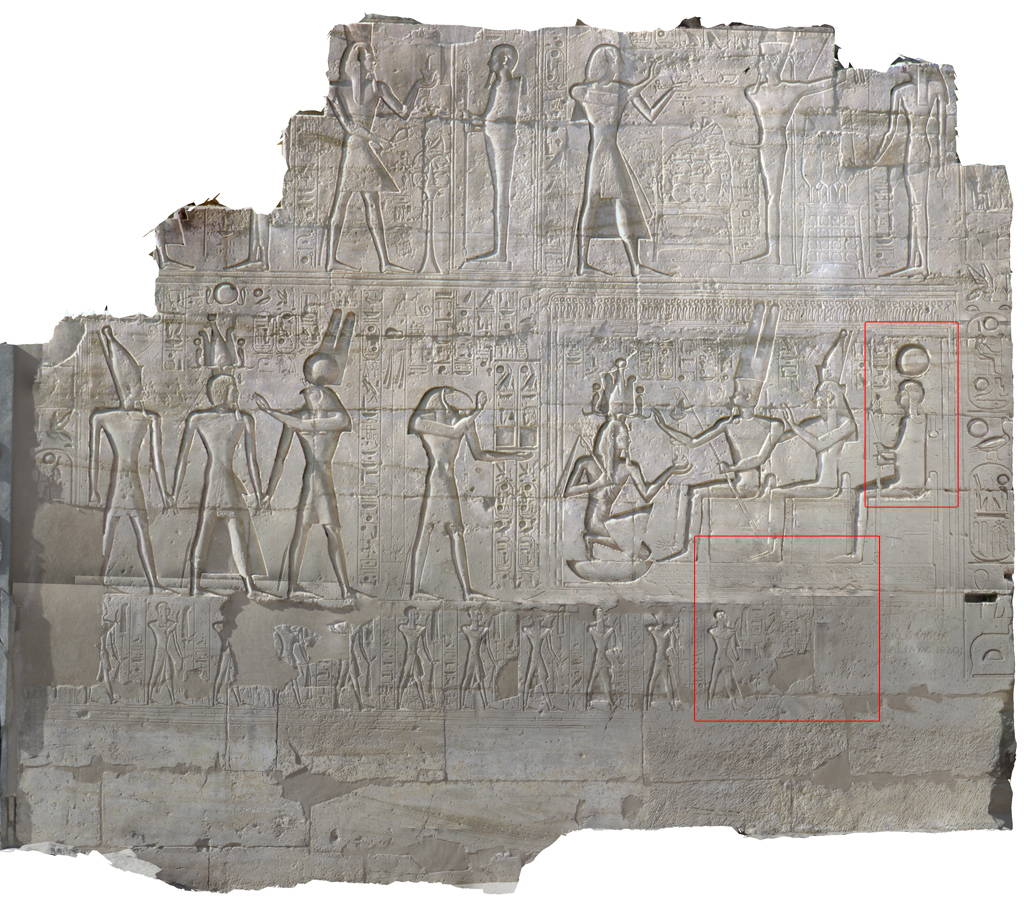 Figure 13. Texture applied on the mesh. 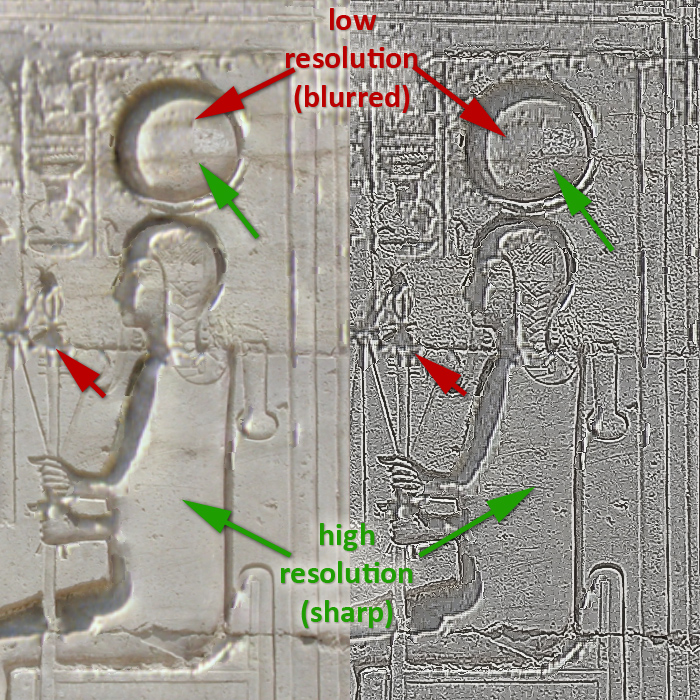 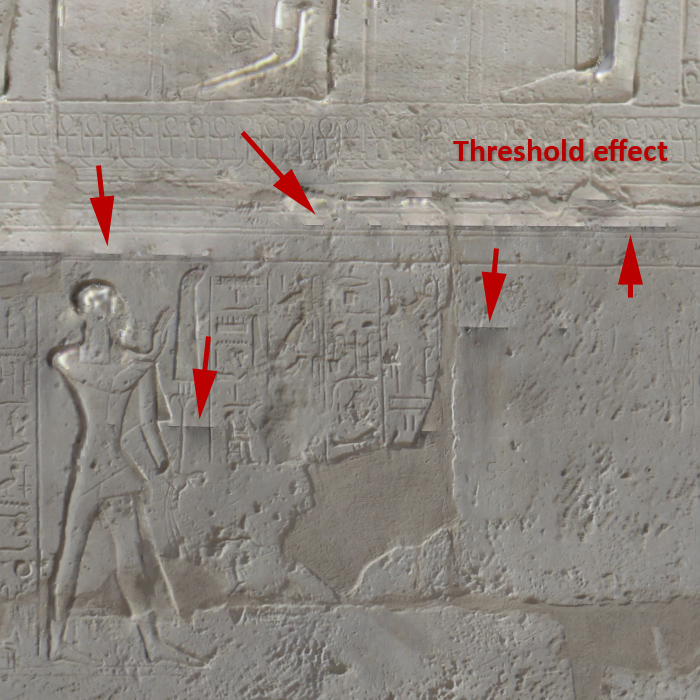 5. Comparison of the dense and the ground truth pointclouds

The last point of this tutorial deals with the assessment of the geometric accuracy of the SfM dense model compared to the ground truth data. 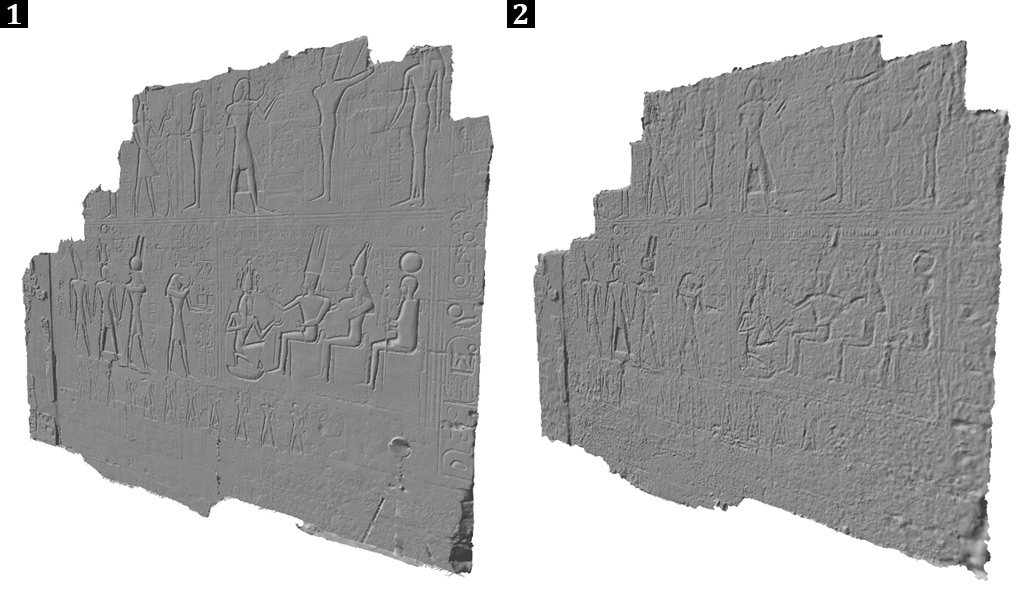 Some screen captures showing the two final meshes viewed in the same conditions are quite eloquent. Although the global structure of the SfM mesh seems to be correct upon an architectural scale (see Fig. 16), the dense reconstruction produces a busy and noisy pointcloud which, even being smoothed after a Poisson reconstruction, fails in retrieving the very details of the wall surface. Especially the depth of the relief is fakely rendered by the shadowed color of the vertices given by the photograph (see Fig. 18.2 & 18.3), without conveying the expected 3D information. At the contrary, the sparser but pretty more regular pointset derived from LiDAR offers a sharper triangulated mesh that is more successful with the documentation of the geometry of the hieroglyphic and reliefs, even if some parts weren’t recorded (i.e. the pseudo-chanfered edges shown in Fig. 18.5), being in a shadowed coverage area and are therefore wrongly triangulated.

Figure 17. Comparison of the ground truth and SfM textured meshes. 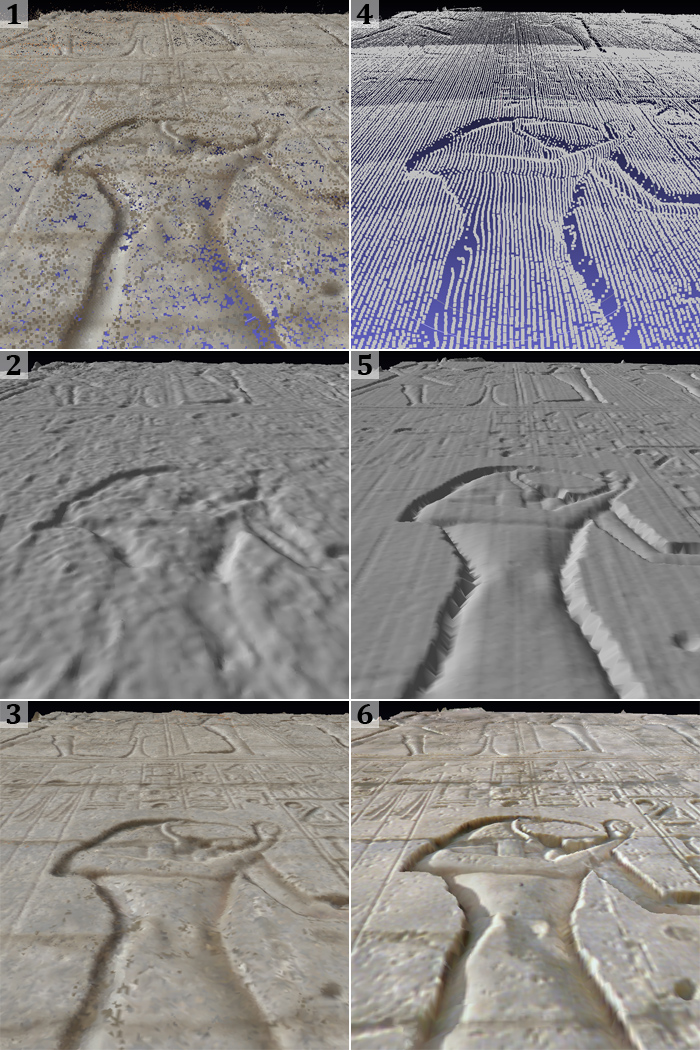 Figure 18. Application of the Hausdorff Distance filter. Blue areas illustrate a significant discrepancy between the two meshes. Red ones are the more convergent.

Here are the statistics of the filter applied, the units are expressed in millimeters.

The Bounding Box Diagonal (BBox Diag) gives us the rough dimensions of our scene, around 14 meters (the length of the wall measured at its bottom is around 10,82 meters), and the Root Mean Square error (RMS) signifies that we have a bit more of 1 cm of discrepancy between the two meshes, which is very satisfactory for recording the global shape of the wall on an architectural point of view, but of course not enough for documenting the hieroglyphics. As shown in Fig. 18, the Hausdorff Distance surprisely witnesses a ring effect for the very convergence of the vertices (in red, ca. 2 mm of discrepancy), while the most part of the wall shows a yellow to green gradient (ca. 14 mm of discrepancy), and the less accurate records, the few blue spats (ca. 26 mm), are located in the hollow parts, where the shadows casted by the sun are the most likely to vary amongst a huge set of photographs taken at different daytime (see Fig. 19).

Figure 19. Different lighting conditions through the collection of photographs regarding the Hausdorff Distance.